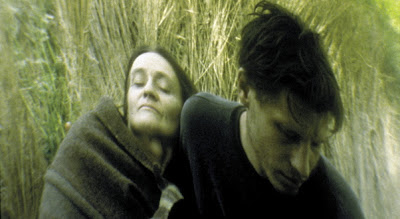 After seeing the movie JFK, I couldn’t have possibly picked a different type of movie than Mother and Son to follow it up with. Where JFK went off in a hundred directions, Mother and Son only has one. This 72 minute Russian film is all about the interaction between a son and his dying mother There is scarce dialogue and the main conflict is the son’s inability to accept his mother’s inevitable death. We have other scenes where the son wanders aimlessly outside, through wheatfields, down pathways and scenes where he is trying to take care of his mother and scenes of his final acceptance of the situation. This is truly an Art film with a capital A. The director here is Aleksandr Sokurov, the director of Russian Ark.

How you react to this film may be a good test for your AFAQ (Art Film Acceptability Quotient), or at least see how you feel about a movie that Susan Sontag liked so much.
Posted by 1001: A Film Odyssey is produced, directed and written by Chris, a librarian. at 11:34 AM