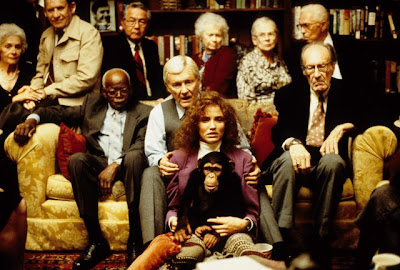 I tried to watch this film a few years ago, but you really have to be in the proper mood for a film about a portal that leads to a portal you enter which eventually leads to reality as seen by actor John Malkovich. I liked Adaptation, the other Stanley Kaufman written film from the 1001 list and liked that one quite a bit.

After viewing Being John Malkovich this time around, I found it pretty clever but very odd. Ok, it’s a portal to a world of John Malkoviches and they charge people to go through it like it’s a sideshow attraction. What can you really say about that? Let’s see…

It does have some interesting insight into puppeteering. Now how many movies can claim that!

And you gotta love any movie that has such a nice role for perennial 70’s game show panelist Orson Bean!

And if you ever wondering what John Malkovich would look like with cleavage, well, this is about the only show in town my friend.

I guess that’s about it.

Posted by 1001: A Film Odyssey is produced, directed and written by Chris, a librarian. at 2:48 PM