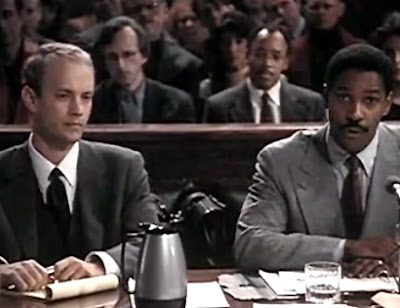 The one movie star of the 80’s and 90’s often compared to the Hollywood stars of yore is Tom Hanks. I’ve even heard his everymanishness compared to Jimmy Stewart. But can you ever imagine Jimmy Stewart in a role as a gay lawyer dying of AIDS? But Tom Hanks carries this off in Philadelphia with a great deal of compassion and humanity. His passionate listening to "La Mamma Morta" is extremely moving and the highlight of the film for me.

The first time I remember seeing Tom Hanks was in the 80’s sitcom Bosom Buddies, where Hanks and Peter Scolari played…hold on, what was it again? It’s been a long time since I’ve seen it. I’m trying to remember without looking it up. They dressed as women in order to live in some hotel so the lady who runs the hotel won’t throw them out, I think. The Hanks character falls in love with the sexy blonde, who of course is best friends with the female version of his character and I think you get the idea. I thought the show was rather stupid, though it did grow on me after awhile, though I thought Peter Scolari might have had a better shot at being a movie start than Tom Hanks.

But Hanks surfaced as a movie star in Splash, where he dated the mermaid, Darryl Hannah. He also appeared in the slob comedy Bachelor Party, which I honestly preferred to Splash. Either way,Hanks became a star and a very likeable one.

Other Hanks movies from the 80’s I recollect with Hanks in them include:
Dragnet, though his part is really in support of Dan Akryod’s Joe Friday.
Nothing in Common, a grim movie as I remember it,though having Jackie Gleason and Hanks as father and son is certainly of interest, Turner and Hooch, where he plays an effective straight man to a slobbering canine.
Punchline, where he shows great skill playing a standup comedian and
Big, where I can't really picture the one joke story of a kid that turns into an adult without Hanks to carry it.

During the 90’s, Hanks was as big a star as anyone.

Films I have seen with Hanks from the 90’s.

A League of Their Own, where Hanks plays an alcoholic ex-player who has to manage a team of women. I like this movie, even if it does have the handicap of having Rosie O’Donnell in it.

Sleepless in Seattle and You’ve Got Mail-Hanks and Meg Ryan didn’t quite become the Tracy and Hepburn of the 90’s, but they did make a couple of popular films.

Apollo 13-As an astronaut who couldn’t quite make it to the moon.

That Thing You Do-Hanks directed it and had a small part as a manager of a band that has a hit in the early 60’s. A nice little movie, Tom.

Toy Story-It’s hard to mistake Hank’s voice as Woody the toy in these movies. How can you not like Toy Story?

The Green Mile-In retrospect, I think this should have beaten out American Beauty for Best Picture that year.Hanks is the prison guard and definitely brings a strong sense of morality to his character. This should have at least gotten an entry in the 1001 movie book!

Castaway-If I thought Hank’s teaming with Jackie Gleason in Nothing in Common was unlikely. How about his teaming with a volleyball in Castaway? I would have thrown Hanks another Oscar for a movie that’s practically a one man show, but I didn’t have a vote.

But the movie that will probably be the first entry in Hanks’s obituary is Forrest Gump. Opinions on this one vary greatly, but I think most can’t imagine anyone but Hanks as Forrest. Michael Keaton, maybe? Nah. After watching it again, I still find it enjoyable storytelling with Mr. Hanks the likable Gump intersecting with significant people and events in American history durign the second half of the twentieth century at its center. 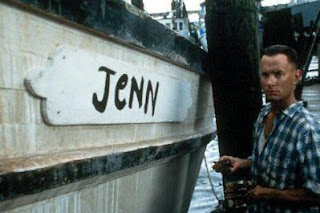 Posted by 1001: A Film Odyssey is produced, directed and written by Chris, a librarian. at 3:06 PM