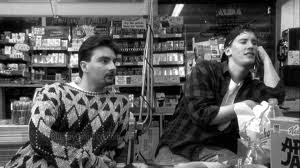 Moviegoers tend to have very differing opinions on the films of Kevin Smith. They either think he’s a genius or hopelessly infantile. I went through a period where I watched most of the Kevin Smith films, but he’s one of those filmmakers that you tend to feel less about the older you get. The relentless bathroom humor doesn’t quite seem as hilarious as it once did. However, I do think one Kevin Smith movie should be in the 1001 book and Clerks does seem like the obvious choice. It’s his first movie and it does have a lot of clever dialogue (as well as some tasteless dialogue as well) and there are many funny situations. The best lines in the film come from Randal (Jeff Anderson).

If you've never seen a Smith film, Clerks can serve as a Beta test for Smith fans. If you like it, you may want to try Chasing Amy. If you don’t like Clerks, you probably want to stay away from Dogma.
Posted by 1001: A Film Odyssey is produced, directed and written by Chris, a librarian. at 2:37 PM