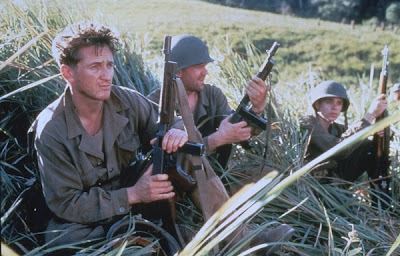 Another movie The Thin Red Line reminded me of a little was The Longest Day in that it was a World War II movie that had a lot of cameos by stars. TheThin Red Line had George Clooney, Woody Harrelson, John Travolta and others in small roles. The Longest Day had small roles for Robert Ryan, Robert Mitchum, Robert Wagner as well as a few stars not named Robert.

My favorite character from The Thin Red Line was the hard headed commander played by Nick Nolte. My favorite from The Longest Day was Richard Burton as a wounded soldier, thought don’t hold me to that as I haven’t seen that movie in probably thirty years.

*I know that sounds like a pretentious observation, but I couldn’t think of any other way to say it.