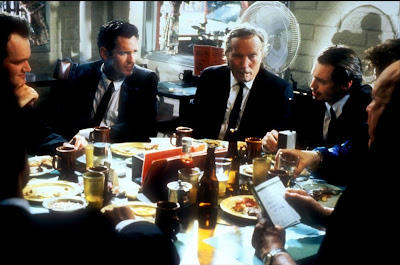 As an avid (if not fantatical) student of movies, Quentin Tarantino’s first film Reservoir Dogs definitely is influenced by the heist gone wrong films of the past such as The Asphalt Jungle, The Killing and Bob the Gambler. He defintely puts a more modern spin in that this group of theives reminise about 70’s music and complain about minutae such as the color code name they are given for their assignment. Reservoir Dogs is extremely dialogue heavy, but the words are entertaining and move at a fast pace. I must say that I like all the actors here. Of course, my favorite is Steve Buscemi as Mr. Pink, the guy who doesn’t believer in tipping. But how can you forget Michael Madsen as the psychopath Mr. Blue? Or raspy voiced film noir veteran Lawrence Teirney as the leader of the heist? Also, Harvey Keitel’s Mr. White, who may be the closest thing the movie has to a main character. Did I mention Mr. Orange (Time Roth)? Chris Penn as Nice Guy Eddie, you can’t leave him out? Even crime writer Eddie Bunker shows up as Mr. Blue. And Tarantino himself is Mr. Brown. Well, I pretty much named the whole cast here. Doesn’t quite hold itself up as well as Pulp Fiction for me, but a distinctive and good film in its own right.

With all the 90’s film I still have left on the list, I may have to do another 90’s month soon. 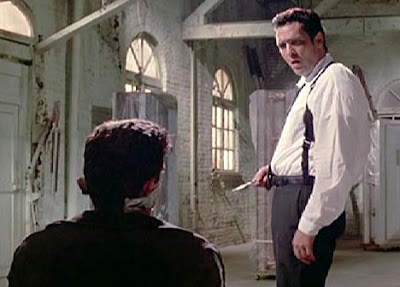 Posted by 1001: A Film Odyssey is produced, directed and written by Chris, a librarian. at 2:20 PM