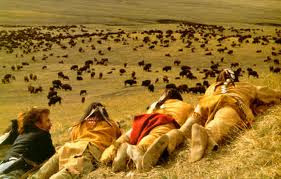 When a film wins a Best Picture Oscar, is a big hit and gets almost unanimous good reviews when it comes out, it seem almost inevitable that years down the road, one could look at it and ask, why did this movie win Best Picture again? (For lack of a better term, I call it Howgreenwasmyvalley Syndrome)

As far as Dances With Wolves goes, it hasn’t helped that Kevin Costner’s later directoral efforts are not considered as being very successful (Though I confess to liking Waterworld). It’s hard not to look through Dances With Wolves (or Driving Miss Daisy or The English Patient or Titanic) as having a higher standard because of the little Oscar fellow it has to carry on its back. How Green Was My Valley doesn’t stand a historical chance because it had the temerity to beat out Citizen Kane for Best Picture in 1942.

Looking at Dances With Wolves now, the down side includes a not totally satisfying ending and the fact that some of the same territory was already covered in Little Big Man.

On the positive side, it has a wonderful John Barry score, great locations and a story whose heart is in the right place. Unfortunately, it may be remembered as a sidenote to the trivial pursuit question, “What movie undeservedly beat out Goodfellas for Best Picture in 1991?
Posted by 1001: A Film Odyssey is produced, directed and written by Chris, a librarian. at 2:43 PM