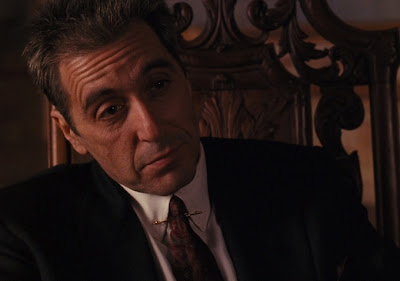 The first two Godfather films are acknowledged classics and personal favorites of mine. Both also won Best Picture Oscars.

The reputation of the third film?

But I wouldn’t dismiss it so quickly. The Godfather III's conflict between the Corleone family and the political workings of the Vatican actually makes for a pretty interesting plot. The helicopter attack on the Dons and the dramatic opera finale are both memorable scenes. And the film has fine characterizations from Godfather first timers Andy Garcia, Eli Wallach and Joe Mategna.

The main casting criticism has been of Coppola’s daughter Sophia is the pivotal role of Mary Coleone. I do agree that Winona Ryder would have been better. However, this isn't the major casting problem of The Godfather III. Coppola said he wanted to get Robert Duvall back as Tom Hagen and the film would balance on a rivalry between Hagen and Michael Corleone. I would have loved to have seen that movie! However, Coppola couldn’t get Duvall and he had to wipe out that part of the plot. I’m guessing that’s why a well known actor like John Savage (playing Tom Hagen’s son) would have such a inconsequential role. Savage doesn’t have the actor playing his father in the movie, so he seems to have little left to do. The Corleone lawyer is played by George Hamilton and I felt like booing him every time he came onto the screen.

I don't give star ratings, but if I did, the first two Godfathers would clearly be 4 star movies, but I'd still give the third one a 3.

Interesting note on the title: Coppola said that when he wanted to call The Godfather Part II by the name that we know it, the studio didn’t want to do it, thinking that the audience might be confused and think it was part of the first film. But The Godfather gave Coppola so much clout, he got his wish with the title and sequel title history hasn’t been the same sense.

When Coppola made the third Godfather film, he actually wanted to call it The Death of Michael Corleone, By 1990, Coppola no longer had enough influence to get the title he wanted and the studio informed him that the title would be, of course, The Godfather, Part III.

Posted by 1001: A Film Odyssey is produced, directed and written by Chris, a librarian. at 3:04 PM