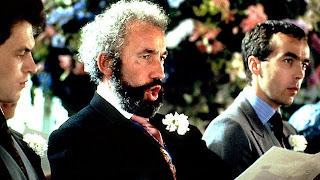 Four Weddings and a Funeral

Clever English film that should more accurately be called Three Weddings, a Funeral and Another Wedding, but I guess that title wasn't quite as catchy.

Who is that Simon Callow fellow?- Mr. Callow is one of those actors that keeps showing up in 1001 films (Amadeus, A Room With a View) and is also an accomplished biographer who penned a three volume set on the life of Orson Welles. If you want to look at one of Callow’s volumes on Welles, you might want to skip watching A Room With A View, or you might find it hard to blot out the picture of the author crazily running around naked. I mean wasn't it bad enough I just had to see Harvey Keitel naked in The Piano? Just saying.