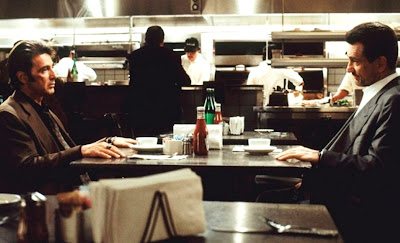 I’m not a huge fan of American action films from the post-Die Hard area. They tend to go overboard with the action and have characters that I can’t get emotionally attached too.

However, Heat is one of the best I’ve seen, if you even want to put the label of action picture on it. The film is almost three hours and uses its time well to develop its characters. There is a firefight that almost goes too far, but is so well done I didn’t care. It is also the first teaming of Al Pacino and Robert De Niro where they actually have scenes together. There is a scene in the middle of the movie where the bad guy De Niro has a cup of coffee with the cop who is chasing him (Pacino) might be a bit of a stretch, but it is still great to watch.

I was pretty much riveted the whole way during this and am pretty enthusiastic about this one. Thumbs up Roger.