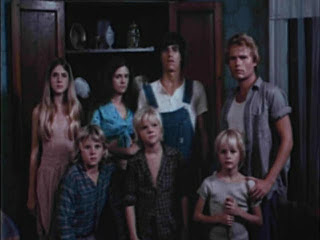 Definitely not The Waltons
The sibs of All the Kind Strangers

A photographer (Stacy Keach) is driving down a rural country road when he spots a boy and gives him a ride to his home. Unfortunately, his home is in the middle of Swamp Nowhere and the photographer is pretty much stranded there with the boy and all his backwoods orphan siblings. This collective want to adopt him as their new Pa, as they have already adopted a new Ma (Sanamtha Eggar).

I had heard about this movie, but had never watched it before. It has a very Deliverancey air to it and has strong horror elements and scary themes of not being able to escape your surroundings. The kids aren't doing the right thing, but you can at least understand their desperate need for family. It 's also interesting to see Stacy Keach playing a victim instead of a victimizer, since he is so good at the latter.

The cast:
Stacy Keach-You don't get much more of a varied career than Stacy Keach. His many credits include: Fat City, Jesus of Nazareth (Barabbas), Up in Smoke (Maybe the funniest thing in that movie), Luther (Martin Luther),  Butterfly (the infamous Pia Zadora film), Hemingway (Ernest Hemingway), American Generation X (a Neo-Nazi) and of course, Mike Hammer.

Samantha Eggar-Refined Englishwoman Eggar is probably the last person one would expect to find living in the swamp with this brood, but I'm guessing that's why she was cast. She was nominated for an Oscar for The Collector in 1966. She played the Barbara Stanwyck role in the unfortunate TV remake of Double Indemnity in 1973. She is very good in the 1979 cult classic, The Brood.

John Savage-Savage plays the oldest boy of the backwoods brood. Savage has certainly made his mark in TV and films in the decades since, including: Hair, Salvador, The Onion Field, Inside Moves, Do the Right Thing and The Godfather III.

Robby Benson-Singer/Actor Benson starred in 70's movies Ode to Billy Joe, The End and One on One. He later added his vocal talents to the Beast in Beauty and the Beast. He's married to Karla DeVito of Paradise by the Dashboard Light fame. Robby also lends his vocal talents to All the Kind Strangers title song!

Director Burt Kennedy was best known for directing and writing Westerns, such as Ride Lonesome, The War Wagon and Support Your Local Sheriff. 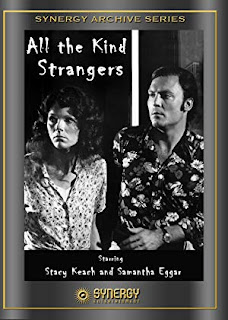