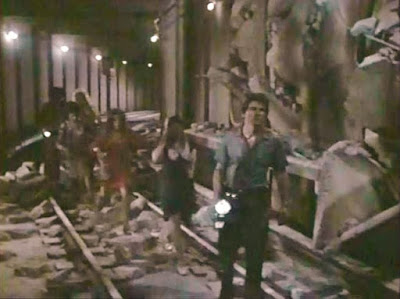 
This is honestly one of the first "grown up" television movies I remember seeing. This was what was so cool about these TV movies. They were stories made for an adult audience, but a kid could watch...because it was on TV! The plot of Short Walk to Daylight involves a subway train than is derailed due to an earthquake and the few survivors try to make their way out of the wreckage to the surface. This is basically a small screen version of the current disaster movie trend, seemingly owing a lot of the plot to The Poseidon Adventure. I think the special effects and the sight of our crew making their way through the rubble is actually pretty good.

Unlike the theatrical disaster movies of the day, A Short Walk to Daylight is pretty short on well-know actors. It does have James Brolin (of Marcus Welby at the time) as the New York cop who tries to get the passengers to the "daylight" in the title.

Barry Shear, director of the cult classic Wild in the Streets was the director here.

Three writers receive teleplay credit here, including Gerald Di Pego, who went on to write the screenplay for Sharky's Machine and Phenomenon. 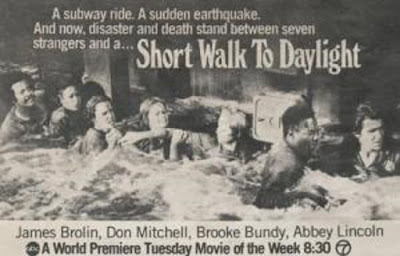