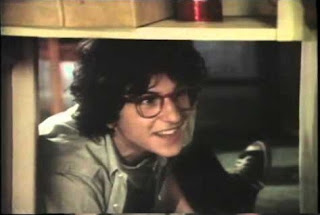 Ronald's home within a home
in Bad Ronald

Of all the early 70's TV movies that I've never seen before, the one I probably wanted to watch the most this month was Bad Ronald. Ronald is a troubled teen who accidentally kills a neighborhood girl. His possessive and slightly psycho mother figures the best solution to this problem is walling off a storage unit of the house for Ronald to live in...I guess indefinitely. Ronald can't come out because of the crime and is totally dependent on his mother for survival. The next problem arises when his chronically ill mother goes off to the hospital and dies. Ronald stays in his room (occasionally coming out for food) as the house goes on the market and is sold to a family, whose three girls have an eerie resemblance to the three Brady Bunch girls. Ronald (still living in his walled-up room all this time) becomes obsessed with one of the girls and the story goes on from there.

It's a weird story. I can only imagine what I would have thought of this if I had seen it at age eleven when it first aired. I guess I must have been busy that night. You do have to look over the plot point of how people (and realtors) didn't notice there was a psychotic boy living in the wall of the house for months and the ending does seem a little bit pat...but on this point I do have to remember this is a movie that aired on network television in 1974 and was not The Texas Chainsaw Massacre. That being said, Bad Ronald is still a creepy and claustrophobic and does touch on issues of teenage alienation in an unusual and unique way. His escapism through his fantasy drawings and imaginary kingdoms is also something that can be related to by many. Bad Ronald is still a must for any early 70's TV movie classic completists.

It's based on a novel by John Holbrook Vance (which I am a little curious about reading). It was also remade in France in 1992 (Mechant Garcon, director).

Cast notes:
Scott Jacoby plays Ronald is what is most certainly his signature career role. However, the movie he won an Emmy for around this time was That Certain Summer, as a boy who is coming to grips with his father's homosexuality.

Kim Hunter is best know for playing Stella in A Streetcar Named Desire and Zira in The Planet of the Apes. She is appropriately creepy as Ronald's nutty mother.

Dabney Coleman (Buffalo Bill, Tootsie) plays the dad of the family that moves into the house with the leftover house guest.

Lisa Eilbacher of Beverly Hills Cop is the oldest daughter here. Her real-life sister Cindy is also one of the sisters. 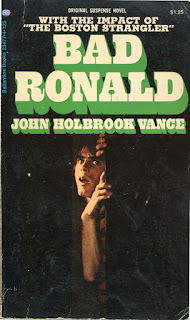 Posted by 1001: A Film Odyssey is produced, directed and written by Chris, a librarian. at 5:27 AM