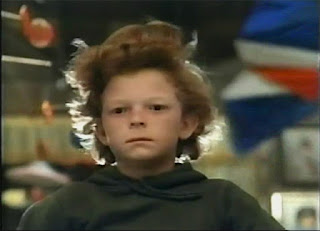 Johnny Whitaker is Something Evil

Something Evil
The main reason one would probably want to see Something Evil is because it is one of the early directorial efforts of Steven Spielberg. The movie is about a couple and their son who move into a remote place that turns out to be SPOILER: haunted! The movie does show some directorial style (especially in the scene when mom is looking for her son in the barn) from the young Mr. Spielberg, but it isn't nearly on the level of his most revered television movie, Duel. It may remind Spielberg fans in some ways of his later film Poltergeist (as producer).

The cast:
Sandy Dennis: A 60's Broadway darling and Oscar winner for Who's Afraid of Virginia Woolf?, Ms. Dennis does fine with the role of the mother here. Her later film resume was a bit sparse, though she did have good supporting roles in The Four Seasons and Come Back to the Five and Dime, Jimmy Dean, Jimmy Dean.

Darren McGavin: McGavin was one of the staples of the early 70's TV movies, most notably The Night Stalker movies.

Johnny Whitaker: As the possessed boy, Whitaker did Something Evil during his post-Family Affair, pre-Sigmund and the Sea Monsters period.

Ralph Bellamy: You just can't go too long going back through American films of the 20th century without Ralph Bellamy popping up now and again. Another TV movie he was in during this time was The Missiles of October as Adlai Stevenson.

Jeff Corey: Jeff is one of those character actors who has appeared in so many things you may have seen without knowing his name. He often played someone sinister or crazy (As in Something Evil). His credits include: Butch Cassidy and the Sundance Kid, In Cold Blood, Seconds, Little Big Man and many, many more.

John Rubinstein: John popped up a lot during the 70's, including the TV movie A Howling in the Woods. He later had a recurring role in Family and gets handed a burning list of Hitlers at the end of The Boys from Brazil. 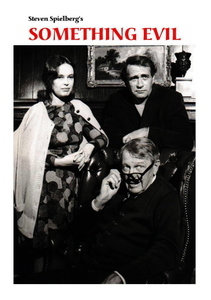 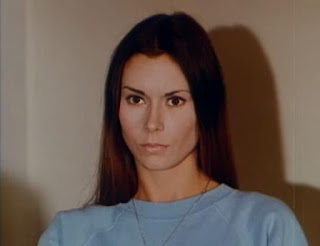 Kate Jackson as a student at
Satan's School for Girls

Satan's School for Girls
Aaron Spelling produced this cult film about an elite school for young ladies where something strange is going on (Hence the title). A lot of the fun of this one is trying to figure out who can you trust and what exactly is going on here.

The Director: David Lowell Rich. Rich's directorial efforts include The Three Stooges' Have Rocket, Will Travel and the last film in the Airport series, Airport '79: The Concorde.

The Writer: Blacklisted writer Arthur C. Ross later received an Oscar nomination for Brubaker. He also wrote the screenplay for Creature from the Black Lagoon!

Kate Jackson: Jackson was scooped up by Aaron Spelling to star as Jill Danko in The Rookies. He later used her as the smart one of Charlie's Angels a few years later. Kate Jackson later played the dean in the 2000 remake of Satan's School for Girls.

Cheryl Ladd: Another one of the girls of the school who Spelling later cast as one of Charlie's Angels.

Pamela Franklin: Pamela actually played the lead here as the girl on the run. She appeared in other cult horror movies, such as Necromancy, The Legend of Hell House and The Food of the Gods.

Roy Thinnes: Plays the good guy professor here...or is he? Roy was in one of my favorite childhood shows, The Invaders.

Jo Van Fleet: Jo Ann plays the dean, the role Jackson takes on in the remake. Jo Ann won an Oscar for East of Eden in 1956.