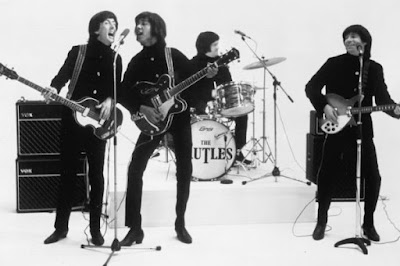 I became a Monty Python fan during the mid 70's with the broadcast of the crazy British comedy show on PBS. I became a Beatles fan in 1976, a few years after the Beatles breakup,  but I quickly became steeped in the history of the Fab Four. This is why the Eric Idle/Neil Innes (Python alum) comedy film, All You Need is Cash, featuring The Rutles was so well timed for me in 1978. The satire and good-natured ribbing is there and many of what the Beatles did is effectively parodied. These include Beatlemaina (Rutlemania) itself, the fifth Beatle (Leppo),  crooked lawyer Allen Klein (Ron Decline), the Surrey Mystic (the Mahareshi( and "We're bigger than God/Rod.". Many of the songs are also riffed and are good in their on right including Cheese and Onions from Yellow Submarine Sandwich and Ouch! from the Rutles film that looks a lot like The Beatles Help.

Of course, I bought the album which is worth it for the great liner notes alone. I'd like to quote you a couple, but I don't seem to have the album anymore. (Sad face) 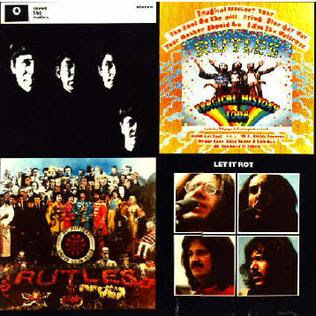 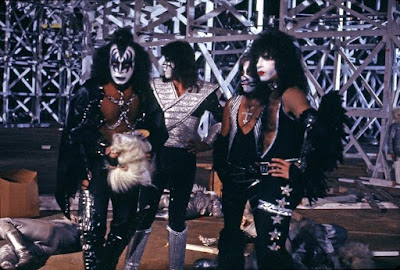 Kiss Meets the Phantom of the Park

On the opposite end of the music TV movie scale is Kiss Meets the Phantom of the Park, a bizarre attempt to incorporate the rock group KISS into a story about a disgruntled employee who takes over control of a theme park.

I actually watched this film last year at Dragoncon in Atlanta. This was for the 40th anniversary of the film and a KISS tribute band was there! The picture below is of my son Collin and two members of the KISS tribute band.

The movie itself is way silly. I think even KISS devotees know the film is to not be taken seriously. As the audience watched the film, it truly did lend itself to riffing from much of the audience. It was all in fun and I think KISS (the original group) did at least win the war of survival over almost all bands of the era, even if being movie stars (at least as a collective) wasn't going to be in their future.

Collin and KISS
Posted by 1001: A Film Odyssey is produced, directed and written by Chris, a librarian. at 6:00 AM