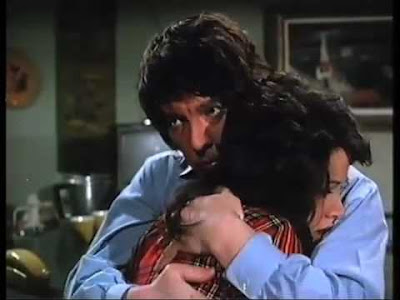 Michael Cole and Janet Margolin in The Last Child

The Last Child is a story of a futuristic society where couples are only allowed one child. One couple (Michael Cole and Janet Margolin) have had a child that has died and become wanted fugitives when they dare try to have another. They are pursued by a relentless government official (Ed Asner) and seek refuge with a kindly retired Senator (Van Heflin).

The Last Child's plot reminded me a little of the much later Children of Men and I find it a pretty good little thriller in it's on right. If early 70's TV movies ever popped up on the television, it might even gain a bit of a cult following! Unless it has one (a cult following, that is) that I don't know about.

The film also makes some thinly disguised references to The Vietnam War, which I find interesting for a 1971 television movie.

Cast
Michael Cole-Best know for The Mod Squad, Cole plays the heroic husband here. It seemed like mostly guest star roles after this film, though he did make an appearance as Henry Bowers in the 1990 television adaptation of Stephen King's It.

Janet Margolin-Janet Margolin plays the mother here.  Her eclectic career included a critically acclaimed role in David and Lisa in 1962 and as Woody Allen's leading lady in Take the Money and Run (1969). Her TV movie roles include Gene Rodenberry's Planet Earth (1973) and Pray for the Wildcats (1974), which I will be posting about in a few days.

Harry Guardino-Harry plays the skeptical brother of Michael Cole her. You know...the one who keeps telling them that they'll never get away with what they are doing! The noted character actor is probably best known for his appearances in the Dirty Harry movies and many are his credits are as Detective someone or another.

Ed Asner-Famed Lou Grant actor seems to keep popping up in many of these TV movies I'm planning for this month. I have at least three on the viewing slate (The Old Man Who Cried Wolf, The Last Child, Haunts of the Very Rich) More may even pop up that I didn't think of. Asnermarathon anyone?

Van Heflin-The performance of the movie is definitely Van Heflin as the Senator who helps the young couple out. This was the Oscar winner's (Johnny Eager) last role. In fact, Heflin died in July 1971, three months before the movie aired. It's worth seeing just for him.

Writer
Peter S. Fischer-Writer Peter Fischer had many television writing credits during the 70's, but The Last Child is the only one I see that could be labeled as sci-fi. I'd say that wasn't too bad of a one shot for the genre. 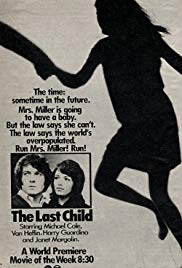