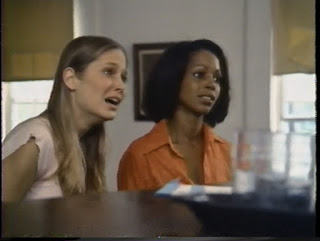 Deborah Raffin and Lynne Moody in
Nightmare in Badham County

Two college students (Deborah Raffin, Lynne Moody) have car trouble in a small town and get in the crosshairs of a vengeful sheriff (Chuck Connors), a corrupt judge (Ralph Bellamy) and end up in a corrupt women's labor camp under a crooked warden (Robert Reed).

This film has definitely gotten a bit of a cult following over the years along the lines of other women in prison movies such as Chained Heat, The Concrete Jungle and Caged Heat. There were even some additionally shot scenes in the version I saw (with nudity of course) that I assume was added for appeal for overseas theatrical release.

I'm surprised I've never seen this before until now. It's one of those that I liked seeing it for the first time...but it's a bit of a guilty pleasure. Should I really still be liking women in prison movies? It does show the corruption of the system, though the way it is corrupt is mostly in the scriptwriter's imagination...or is it?

The cast:
Deborah Raffin-Deborah plays one of the college students here and she demonstrates a lot of emotional range in her performance. I honestly haven't seen her in many things, though her 70's movie credits include: Once is Not Enough (as January), Haywire (as Brooke Hayward), How to Pick Up Girls and Ski Lift of Death.

Lynne Moody-Lynne has had a lot of TV credits over the years, but I still mostly think of her for her one season on the 70's show, That's My Mama. Other 70's credits include Roots and Roots: The Next Generation.

Chuck Connors-Connors seemed to use his famous TV series good guy roles (The Rifleman, Branded) as a jumping off point to often playing villains in TV movies, none so much as the evil sheriff here. He also played a wicked slave owner in Roots. 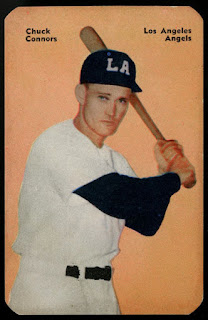 Ralph Bellamy-The ubiquitous Mr. Bellamy did not appear in Roots or Rich Man, Poor Man, but did appear in the later 70'a mini-series The Moneychangers and Once an Eagle.

Lana Wood-Lana Wood plays a tough prison guard here. I saw her earlier this month in The Over the Hill Gang Rides Again and will play a prostitute in Little Ladies of the Night. 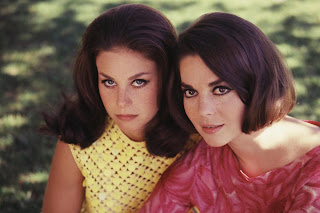 Tina Louise-With Tina's three year turn as Ginger Grant in Gilligan's Island still haunting her, she became a Stepford Wife in 1975 and an evil prison guard in Badham.

Della Reese-Della plays the old, wise prison farm inmate here. During this time, I mostly remember Della from her appearances on Chico and the Man.

The director: John Llewellyn Moxey
That man again! Other credits include: The Night Stalker, The House That Wouldn't Die, The Last Child...and that's just from movies I watched this month! His final career credit was a 1991 episode of Murder, She Wrote. Thanks for the memories, John.

The writer: Jo Heims
Jo's credits included Clint Eastwood's Breezy, the horror film You'll Like My Mother, The Elvis film Double Trouble and an episode of Here Comes the Brides! 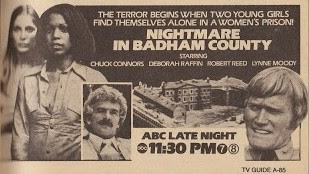