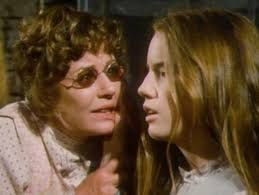 Patty Duke and Melissa Gilbert
in The Miracle Worker

The 1979 TV movie version of Williams Gibson's The Miracle Worker featured Patty Duke as Annie Sullivan and Melissa Gilbert as Helen Keller. The story of course is about young Annie Sullivan's attempt to educate the seemingly unteachable blind, deaf and dumb girl Helen. Part of the original interest in the TV movie is Duke, who played Helen in the 1962 version, now taking on the role of Annie Sullivan. It's more than novelty casting as she's quite good in the role.

Me as Captain Keller in The Miracle Worker

Charles Seibert plays the Captain in the television adaptation. Captain Keller is good to his wife for the most part, mean to his son and doesn't know how to deal with his daughter at all. He also has conflict after conflict with Annie Sullivan, but eventually comes around to admitting her effectiveness as a teacher. 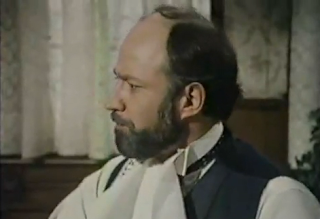 Anyway, the cast from this version:
Patty Duke-Patty appeared in many 70's TV movies, including My Sweet Charlie, Look What's Happened to Rosemary's Baby, Fire and Having Babies III!

Melissa Gilbert-Plays Helen Keller. Best known for Little House on the Prairie, Melissa followed up The Miracle Worker playing the title role in The Diary of Anne Frank. She has appeared in many TV movies since.

Diana Muldaur-Mrs. Keller. Diana was in McCloud, Star Trek, L. A. Law and many other TV shows over the years. TV movie credits include Genesis II and The Word.

Director Paul Aaron's other credit include A Force of One with Chuck Norris.

Writer William Gibson's (No, not the cyberpunk author!) credits also include Two for the See Saw. The Miracle Worker is his best known work. 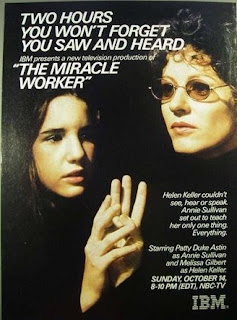