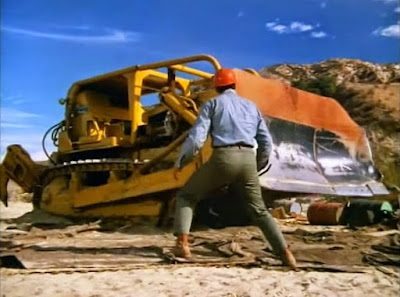 A meteorite lands on a remote island and later reeks havoc on a construction crew there to build an airstrip. How does it do it? By possessing the team's bulldozer and slowly knocking them off when they try to use it. Farfetched? Yeah. Silly? A little bit. Can I relate to it? Yeah, because most electrical equipment I operate seems to be possessed, too!

Killdozer! (You must use an exclamation point) has gained a cult following over the years. I'm sure the story has also had an influence on a lot of Stephen King's later work. 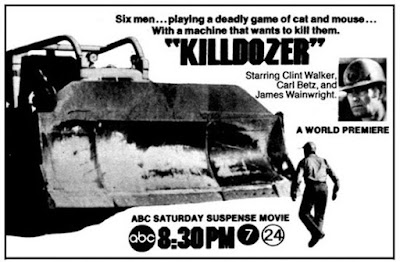 The cast:
Clint Walker plays the foreman of the work crew. Big Clint (6'6) was probably best known for (other than Killdozer!, of course) starring in the long running TV Western Cheyenne and as being one of The Dirty Dozen. Clint died in 2018 at the age of 90.

Carl Betz won an Emmy for the TV drama Judd for the Defense, which was a TV show that was always rerun on Sunday afternoons after football games. I don't ever remember actually watching an episode.

Neville Brand- Noted character actor (Stalag 17, many westerns) is on hand here as one of the crew. He was in a controversial Twilight Zone episode (The Encounter, with George Takei).

Robert Urich-A pre-Soap, SWAT and Vegas! Urich appears here in one of his earliest roles.

The director: Jerry London's other credits include almost every show on network TV during the early 70's. He later directed other noted TV movies, including Shogun in 1980.

The writer: The movie is based on a 1940's short story by science-fiction writer Theodore Sturgeon. 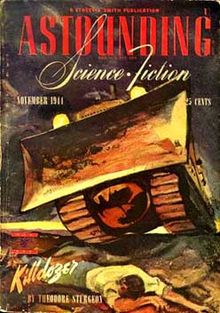