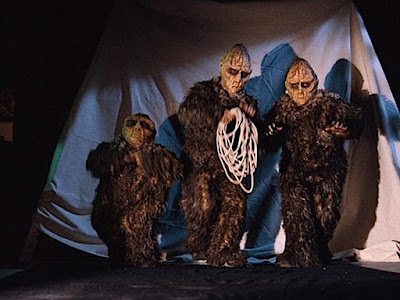 Don't Be Afraid of the Dark is the story about a couple who inherit an old house and while refurbishing it, come across some rather strange creatures living within the house. The wife is the one to discover it and she is not believed by her husband and friends. The caretaker warns them to stay away from certain areas and of course he is ignored.

The creepy, gremilin-like creatures are one of the elements of that has given Don't Be Afraid of the Dark a cult appeal, much in the vein of Trilogy of Terror.  The signature scene of the movie to me is when the gremlins tie a rope around the wife and begin to drag her off to the bowels of the house. The film  provides nice suspense and was well thought of enough by Guillermo del Toro, that he remade it as a feature film ihn 2011! 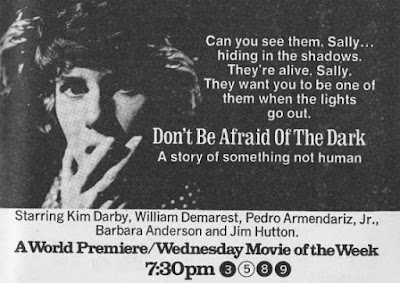 The Director:
John Newland was best know (to me) as the Rod Serling-like host of the paranormal anthology series, One Step Beyond. He also directed all 96 episodes of that show!

The Writer:
Nigel McKeand has a few television writer credits, including a few episodes of The Waltons. Don't Be Afraid of the Dark would seem to be his writing benchmark.

The Cast:
Kim Darby will forever be best known as Mattie from the original True Grit. I suppose because of her True Grit role she seems a little young to be married to Jim Hutton in this movie just four years later, but she is good as the terrorized wife here.

Jim Hutton: 60's leading man, star of The Green Berets plays the forever too-busy husband. He made a lot of appearances on 70's television,  including the short-lived Ellery Queen series.

Barbara Anderson plays Darby's friend. I couldn't place Anderson at first until I realized she was a long-time regular on the Raymond Burr series, Ironside. Ironside was one of my mother's favorite shows, so I did watch it on occasion back in the day.

William Demarest plays the caretaker. Demarest is a long-time character actor, (usually playing someone cranky it seemed like) appearing in several Preston Sturges movies during the forties. He had just come off a long run as Uncle Charley on My Three Sons before Don't Be Afraid of the Dark.

Posted by 1001: A Film Odyssey is produced, directed and written by Chris, a librarian. at 5:30 AM