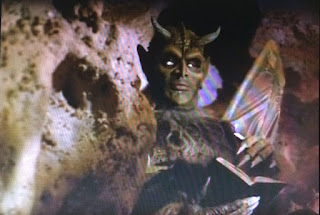 Bernie Casey as the head of the Gargoyles

Okay, I better get this one over with.

Here's a plot synopsis as far as I can tell:
A paleontologist/writer named Boley is traveling through the Southwest with his attractive daughter Diana to meet an old duffer who says he has some information about a key archaeological find. The old guy shows Boley some bones of what appears to be an unknown winged creature with almost human features.

Boley is skeptical but decides to make a recording of the guy's story. As they are working, the cabin where they are working is attacked and the entire structure collapses and a fire is started killing the old man. Boley and Diana escape with the head of the skeleton of the creature. The pair realize who did this as they drive away and are attacked by...living, breathing Gargoyles!

The police take a drive out to the scene of the fire and detain a looting motorcycle gang who they initially charge with setting the fire.

In the meantime, the Gargoyles break into Boley's room to steal back the skeleton...they also later kidnap Diana and take her back to their Gargoyle cave.

Boley convinces the sheriff that there are indeed gargoyles among us and the motorcycle gang even helps going after the creatures. 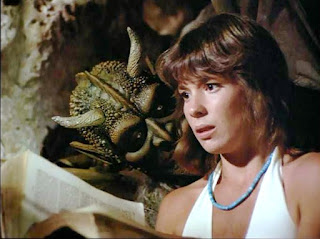 A Gargoyle with a taste for Salt

While all this is going on, we see Diana in the cave with the head Gargoyle who apparently can not only speak English but also is reading Boley's books! Is this a Beauty and the Beast kind of romantic thing starting? I never could figure it out.

Boley, the police and the motorcycle gang head to the cave and confront the gargoyles and some violence ensues. We also find out during this time that the Gargoyles have killed poor Mrs. Parks and hung her up for all to see. During the battle, we see the gargoyle eggs about to hatch and head biker Reager starts a gasoline fire and destroys them. The head Gargoyle flies away with his mate offering the potential that they will indeed live to produce offspring in another cave.

Definitely a case of a movie that seemed kind of scary at the time (I probably saw it in the late 70's, actually) that is pretty cheesy in reality. The head Gargoyle looks pretty good, though his motivations are unclear and his survival strategy for his species leaves a lot to be desired. Some of the subordinate Gargoyles look more silly than scary...a little Creature of the Black Lagoony. I couldn't figure out why at one point one female gargoyle helps Boley find his daughter, but I'll try not to ponder it too much.

The Cast
Cornel Wilde- 1940's leading man (Leave Her to Heaven, The Greatest Show on Earth) got a later starring role here. You have to give the guy credit for doing shirtless scenes here in his 60's. Wilde later starred in the movie Shark's Treasure, which got a lot of TV play in the mid-70's in an attempt to get some of the Jaws mojo.

Jennifer Salt-Later of the show Soap, I now think of Jennifer from the book Easy Riders, Raging Bulls as being an early 70's party girl (with her buddy Margot Kidder).

Bernie Casey-former footballer Casey used his supporting role in the critically acclaimed Brian's Song as a stepping stone to playing the head Gargoyle in this film,. I guess. Work is work. Casey has a successful acting career for many years after, including playing Felix Liter in the Bond film Never Say Never Again.

Scott Glenn-Speaking of successful acting careers, Mr. Glenn played the head of a motorcycle gang here. He went on to play prominent roles in numerous films, including The Right Stuff, Nashville, Urban Cowboy and The Silence of the Lambs and as a coach in the 70's lesbian track and field drama Personal Best.

Woody Chambliss-character actor Chambliss had a lot of TV movie acting credits, but I think of him first as being one on Aunt Bea's suitors in The Andy Griffith Show. 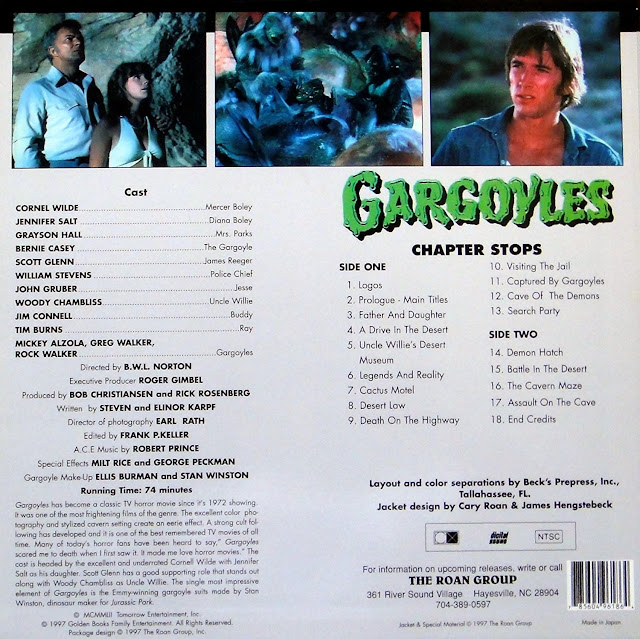