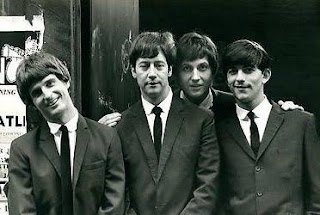 Birth of The Beatles

Dick Clark productions followed up the success of the Kurt Russell/John Carpenter  Elvis biopic with a telling of the early days of The Beatles. If you are a Beatles fan, you know some of the things that are going to be covered: Their timely meeting with manager Brian Epstein, the death of their art student bass player Stu Sutcliffe, their endless performance dates in Germany and their dismissal of drummer Pete Best in favor of new guy Ringo Starr. Best served as technical advisory for the film and it does tend to take his side on things.

The film is okay, but I'd much rather go back and watch a Beatles documentary on the period if I had my druthers.

The director of the film is Richard Marquand, later went on to direct Return of the Jedi. 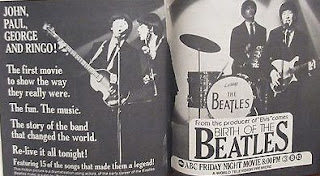 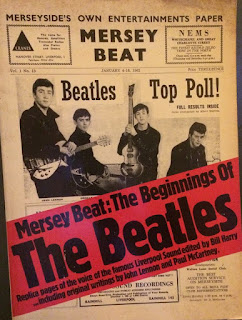 Mersey Beat:
The Begnnings of The Beatles
Edited by Bill Harry, 1977

Yes, this is a copy of my book. I got lots of other Beatles memorabilia. If you'd like to see some, drop on by the house!
Posted by 1001: A Film Odyssey is produced, directed and written by Chris, a librarian. at 5:00 AM