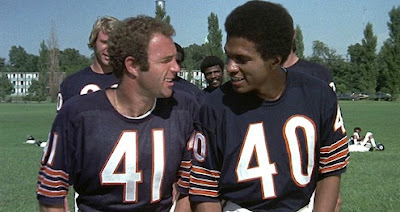 I couldn't do a 70's TV movie retrospective without looking at Brian's Song again.  This story of the friendship of two Chicago Bears running backs, the black superstar Gale Sayers and the white scrappy Brian Piccolo is probably the most famous of all the 70's TV movies (At least I think so). Their friendship makes up a good part of the story before Brian gets afflicted with a terminal illness. Don't forget to bring a handkerchief. In fact, in Michael McKenna's book, The ABC Movie of the Week: Big Movies for the Small Screen, he discusses how several jock types have admitted this was the only movie that ever made them cry.

Brian's Song was shown on network TV around the holiday season for several years during the seventies.

The Cast: James Caan played Brian Piccolo to great acclaim. He played Sonny Corleone in The Godfather the following year and became a major movie star during the 70's.

Billy Dee Williams played Gale Sayers and was in many more movies such as Lady Sings the Blues throughout the decade. He was a spokesman for Colt 45 for many years (Don't Let the Smooth Taste Fool You) before landing the role of Lando Calrissian in The Empire Strikes Back.

Jack Warden is a supporting actor legend. He appeared in at least one other football movie during the 70's (Heaven Can Wait).

Bernie Casey- Casey played professional football for the 49ers and the Rams and made the transition into a successful acting career, including his role here as an assistant coach. His TV movie credits include The Martian Chronicles with Rock Hudson and as the head gargoyle in Gargoyles!

The Director: Buzz Kulik
You could try to make the case that Buzz directed the most famous 70's TV movie (Brian's Song) and the biggest 70's cult TV movie (Bad Ronald).

The film is based on the book I Am Third,by Gale Sayers and Al Silverman. 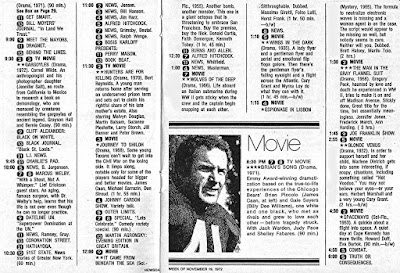