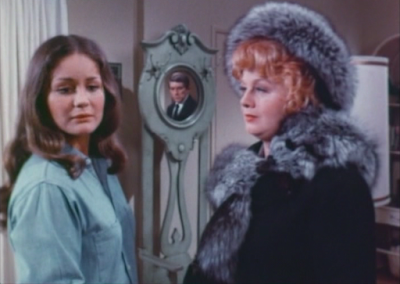 Belinda Montgomery, Shelley Winters and the benevolent gaze of
Jonathan Frid in The Devil's Daughter


The Devil's Daughter premiered on ABC on January 9, 1973 and I'm pretty sure I watched it when it first aired. That would have made me ten at the time. I've got to say it scared the bejesus out of me.

The plot involves a young lady named Diane who attends the funeral of her mother and gets involved with a strange older woman who was a friend of her mother's, but also is the leader of a satanic cult. She tries to get away from them, but the man she falls in love with and a kindly judge turn out to be in on the plot too.

Plots where everyone turns against the antagonist have always been something that I have found scary, especially when I was younger. Some of the special effects such as Diane's husband having glowing eyes and Joseph Cotten turning into the devil may not date quite as well.

I still like this movie, I got to admit. The tension does build nicely, though some of the plot points do seem to be rushed as they often do in this 73 minute ABC movie of the week format.

The Director:
Jeannot Szwarch went on to direct another cult favorite of mine, Bug! in 1975. It's certainly better than
Jaws 2, which Szwarch also directed.

The Writer:
Colin Higgins. This is why I like to look things up. I would have never guessed the the writer of The Devil's Daughter and the writer of Harold and Maude were the same person!

The Cast:
Belinda Montgomery was a frequent guest star on many television shows during the 70's. She also appeared in other television movies such as the prison movie, Women in Chains. But she'll always be the daughter of the devil to me.

Shelley Winters-Legendary actress Shelley Winters has a field day as the satanic leader here. She sort of reprises her role a few years later in The Initiation of Sarah.

Robert Foxworth-Foxworth plays the man Diane falls for in The Devil's Daughter. Other horror credits for Foxworth include: Frankenstein (1973), Damien: Omen II, and Prophecy. I also remember him as a frequent Password panelist during the 70's, but that's neither here nor there.

Abe Vigoda-No satanic cult is complete without Abe Vigoda! The Devil's Daughter was Abe's follow up to playing Tessio in The Godfather.

Jonathan Frid-Frid plays the servant of Winters and is the one character who truly seems to try to help Diane. This is about the only major non-Dark Shadows role on film for the actor who brought Barnabas Collins to life in Dark Shadows during the late 60's. I wish there were more.

Joseph Cotten-The Mercury Players original has a couple of nice scenes as a sympathetic judge who turns out to be...SATAN! Joseph Cotten turning into Satan in an early 70's TV movie isn't nearly as cringeworthy as it sounds. By the end of the decade, Cotten did the one-two punch of appearing on The Love Boat and Fantasy Island, which is pretty cringeworthy.

An Abe Vigoda cult?
Where do I sign up? 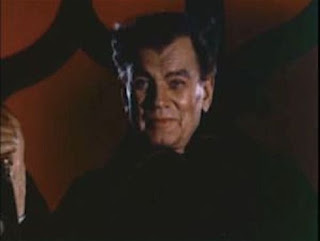 Joseph Cotten turns into the devil!
in The Devil's Daughter