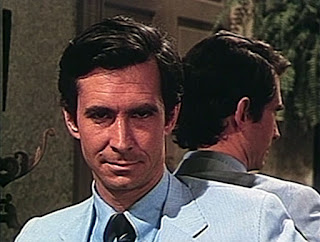 Go Ask Allan...Anthony Perkins
in How Awful About Allan


How Awful About Allan is a horror/thriller about a man that goes blind after seeing his father die in a fire, for which he bares some responsibility. Still suffering from partial blindess after treatment, he is taken care of by his sister, who also takes in a mysterious boarder in their house.

The movie takes advantage of Allan's visual impairment to not show the audience not quite everything that is going on and keeping some of the plot twists hidden until the end.

Horror movies may have been the most successful genre of the Movie of the Week. It had to by nature be low scale, and couldn't be too gratuitous, but made up for it by dealing with more character development and drama more than some contemporary theatrical horror films. At least as much drama as you could fit into the standard 73 minute running time.

It also helped when these TV movies could get actors who had previously became prominent in theatrical films.
Anthony Perkins as Allan is clearly playing off the fact that so many know him as Norman Bates in Psycho (He also played off this in other films such as Pretty Poison and Crimes of Passion).

Julie Harris (Multiple Tony winner and Oscar Nominee for Member of the Wedding) is also on hand to play Allan's sister.

The film is an Aaron Spelling (Charlie's Angels, Beverly Hills 90210) production. His name comes on a lot of TV movies of this period. I give him credit for that...But The Love Boat? Not so much. 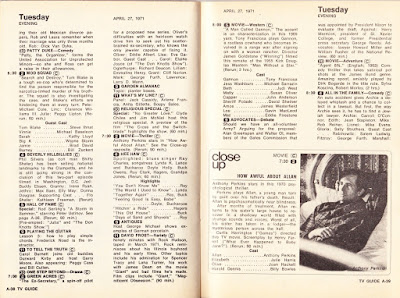 Who remembers when TV Guide had extended "close up" information for certain
shows? (Raising hand) 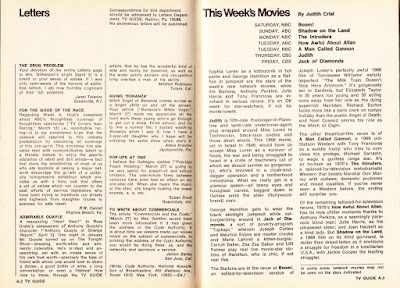 Who remembers Judith Crist's weekly reviews for all
movies on network TV for that week? (Raising hand once again)