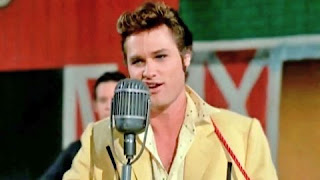 One of the reasons I wanted to blog about a month's worth of films of TV movies is my realization that I had missed some of the big ones like John Carpenter's Elvis. This film came out a little over a year after the death of Presley in 1977. It starts with Elvis about to go on stage in a hopefully triumphant return to in the late 60's. We then flash back to Elivs's childhood and his eventual growing in to the biggest superstar Rock and Roll had ever seen. Elvis is played by Kurt Russell, who up until that time was know mostly for Disney comedies. He truly transforms into the young Elvis and Carpenter and Russell should be given a lot of credit for showing us a full-blooded Elvis that could have easily become just a caricature. The Elvis shown in this film has his faults, but it is a largely positive portrayal as a man who is devoted to his friends and loves his mama!

Russell later played an Elvis impersonator in 3000 Miles to Graceland in 2001. 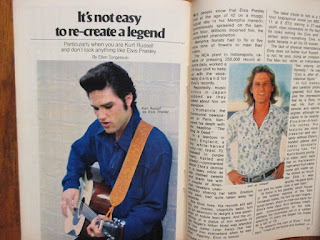 Other cast members:
Shelley Winters plays Elvis's mama. Shelley was in two other TV movies I watched for this month (The Devil's Daughter and The Initiation of Sarah) but this is the only one she plays a sympathetic character.

Season Hubley played Priscilla Presley. Season appeared in a lot of television in the 70's including the movie She Lives! and an episode of Kung Fu that I can recall. She also appeared in Paul Schrader's Hardcore in 1979.

Pat Hingle played Colonel Tom Parker. Pat appeared in so many things over the years, I wouldn't know where to begin a list of his credits. He did have a nice role in Norma Rae in 1979 and later played Commisioner Gordon in Batman (1989).

The singer who dubbed Elvis's singing was  Ronnie McDowell. He released a single "The King is Gone" in 1977.

When Elvis debuted on ABC, it famously went up against Gone With the Wind on CBS and One Flew Over the Cuckoo's Nest on NBC. For the record, I watched Cuckoo's Nest which explains why I didn't see this the first time out. 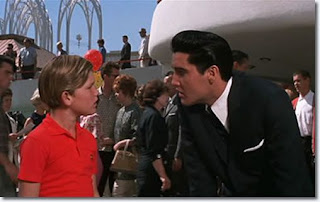 August 17, 1977 Atlanta Constitution
From my scrapbook
Posted by 1001: A Film Odyssey is produced, directed and written by Chris, a librarian. at 5:24 PM