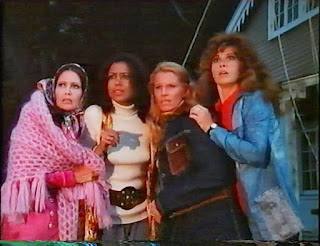 Four of the five desperate women
of Five Desperate Women

The first of today's early 70's television movie trapped on an island double feature is Five Desperate Women. Five former schoolmates reunite to go on a island retreat. They begin to relate their problems to each other, dig up a few wounds, drink a little...and then they find a killer is among them. Part of the plot involves trying to guess which one of their two male guides is the killer.

The Women
Stephanie Powers-Late of Girl from UNCLE and still a few years from Hart to Hart, Stephanie did a handful of TV appearances in the interim. I remember her fondly from the Bigfoot episode of The Six Million Dollar Man.

Denise Nicholas-Will always be Liz the guidance counselor from Room 222. She was later a regular on In the Heat of the Night.

Joan Hackett-Many film and TV appearances for Joan during her career. An Academy Award nomination for Only When I Laugh. I still remember her best from The "A Piano in the House" episode of The Twilight Zone.

Julie Sommars-This is a name so far in the background to me, I can only think of...I must have seen her in something? My God! She was in every cop show in the 70's! Still nothing. I guess I'm just going to have to go with Five Desperate Women as my Julie Sommars point of reference.

Anjanette Comer-Not to be confused with Antoinette Bower or Samantha Eggar, Comer appeared often on television, as well as starring in the cult films The Loved One and The Baby.

The Men
Bradford Dillman-When I think of Dillman, I'll always think of the 1974 movie Bug, first and foremost. His other credits over his long career include Escape From the Planet of the Apes, The Enforcer and The Way We Were.

Robert Conrad-Starred in one of my all-time favorite shows, The Wild, Wild West. He tried his hand at other shows over the years, including Baa Baa Black Sheep. I remember him as competing in a footrace with Gabe Kaplan in Battle of the Network Stars (and losing)...and why the hell do I remember that?

Director
Ted Post had a lot of television credits, but occasionally got a feature film assignment, including Magnum Force and Escape from the Planet of the Apes (with Bradford Dillman).

Writer
Marc Norman later hit writer pay-dirt when he won the Oscar for his (and Tom Stoppard's screenplay) for Shakespeare in Love. 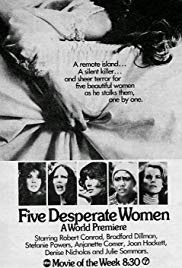 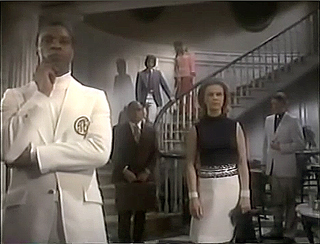 Our second trip to the island features an odd collection of rich folks, who go on a plane trip to an island and don't know why they are there and they don't know how to get off. It starts off like Fantasy Island and slowly turns into something resembling an episode of Night Gallery...With maybe a little of The Exterminating Angel thrown in? No, never mind that reference. It's interesting...a bit strange...some good plot twists here and there..but not all that memorable to be honest.

The Cast:
Lloyd Bridges-Lloyd was in an awful lot of television movies during the classic ABC movie of the week period. The Silent Gun, Joe Forrester and the sci-fi The Love War are among these credits. And yes, I think of Airplane! first when I see Lloyd's name pop up.


Cloris Leachman-The Phyllis and Mary Tyler Moore Show star plays the default romantic lead here (with Bridges). Leachman has won more prime-time emmys than anyone, including one for the TV movie, A Brand New Life.

Ed Asner-Another Ed Asner movie! Ed kept real busy with roles during his Mary Tyler Moore Show hiatus, I'll say that. Ed also has one of the strangest spit-takes in Haunts of the Very Rich that I've ever seen.

Donna Mills-The main credit for Donna Mills will always be as the undercover detective in The Bait (1973). Yes, my ten-year-old self thought differently of girls after seeing the beautiful Ms. Mills in that movie that night.

Moses Gunn-Moses plays the Ricardo Montalban role in Haunts of the Very Rich. He always seemed to play someone well-spoken who could supply the exposition to almost anything. I honestly remember him foremost for his appearances on The Cosby Show.

Tony Bill -Bill had a most eclectic career as an actor, director and producer. He will show up in a couple of other TV movies later on this month.

The Director
Paul Wenkos, whose feature film credits include The Mephisto Waltz (with Bradford Dillman)

The Writer
William Wood. Many television credits from this decade, including Room 222 (with Denise Nicholas) 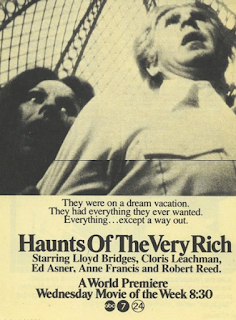