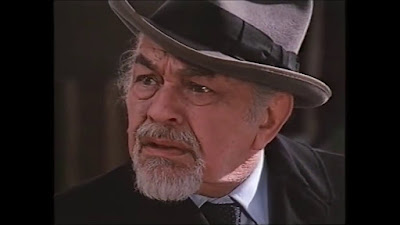 Nobody is taking this seriously!
Edward G. Robinson in
The Old Man Who Cried Wolf


Drama about a elderly man named Emile who witnesses the murder of a friend and can't seem to convince anyone around him as to what he has witnessed and that he is in great danger himself.

This film has an almost Invasion of the Body Snatchers feel to it. Nobody seems to be on Emile's side and the few that are (his son and daughter-in-law) think he's going mad.

It's a pretty strong little film and the best reason to view it is Edward G. Robinson. This is the last starring role for the screen legend (Little Caesar, Key Largo, Double Indemnity) and even on the small screen, he is a strong presence. His character is growing frail in some ways, but is still mentally strong and determined in many others. Certainly worth 73 minutes of your time for Robinson fans.

Martin Balsam-Plays the son. Prolific character actor won an Oscar for one of my favorite movies, A Thousand Clowns.

Diane Baker-Plays the daughter-in'law, I'll always think of her as the female lead in the final episode of the television show, The Fugitive with David Janssen.

Ed Asner-Plays a sympathetic doctor who misdiagnoses Emile . I'm going to see Ed a couple of more times in TV movies this month.

Ruth Roman-Plays an untrustworthy dame that Emile meets. Ruth later pops up in this month's films in Go Ask Alice.

Percy Rodrigues-Plays a heavy here. I know him best from Star Trek (Court Martial) and The Heart is a Lonely Hunter.

Sam Jaffe-Plays Emile's friend who is murdered in the opening scene. Maybe best known as the title character in Gunga Din. He played a totally sympathetic scientist in The Day the Earth Stood Still and a totally unsympathetic criminal in The Asphalt Jungle. 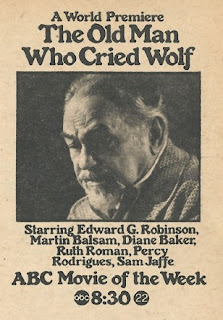