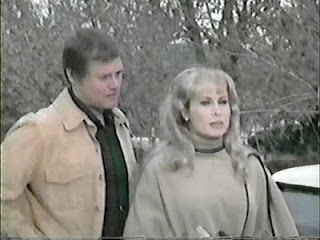 A Howling in the Woods is about a woman in a troubled marriage named Liza Crocker who returns to her home town to see her father, only to discover the entire town is behaving strangely towards her and there appear to be more than a couple of puzzling mysteries afoot. This is a pretty good suspense thriller from the NBC (Not ABC this time!) machine and one that I had heard about years ago from a friend, but am only watching now for the first time. Based on a book (you can see some literary touches here and there) by Velda Johnston.

The woman is played by Barbara Eden, who was a frequent performer in TV films during her post-I Dream of Jeannie period. Barbara always looks stunning (to me, anyway) and she is effective in the lead role. Speaking of I Dream of Jeannie, it's interesting that her husband in A Howling in the Woods is played by her Jeannie TV husband, Larry Hagman! Other cast members include a young Tyne Daly and Vera Miles, who was in a thriller or two of her own with Alfred Hitchchock, John Rubenstein, character actor Karl Swenson, and a poor old hound dog, who makes the noise the title of the movie derives from.