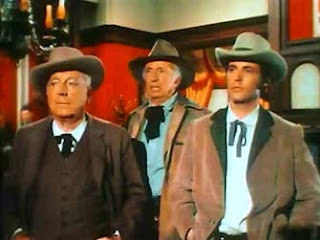 Westerns weren't a common genre during the 1969-1975 run of the ABC movie of the week, but I do have a vague recollection of watching the Over the Hill Gang movies when I was a kid with my parents. The plot of the first one in this series involves a cast of past their prime Texas rangers who are called in to bust up a corrupt political machine in a small town. The rangers are led by movie veteran Pat O'Brien, who is accompanied by Western veterans Walter Brennan, Chill Wills and Edgar Buchanan. Andy Devine, Edward Andrews, Rick Nelson (Yes, the former teen idol) and Gypsy Rose Lee (Yes, the famous exotic dancer) lend support. 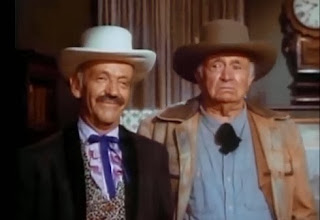 The Over-the-Hill Gang Rides Again has our aged heroes back to provide law and order (minus O'Brien)
in another town. Fred Astaire joins the cast this time as a former deadly shot called The Baltimore Kid who has resorted more towards drinking than shooting in recent years.

I look at these two movies today and have trouble differentiating them as much more than an extended (73 minutes apiece) episode of The Big Valley or some other TV Western from the time. The main appeal is watching the veteran cast in action .

These TV movies quickly began providing a place where well known actors who were past their prime a place where they could be front line stars again...a situation which pretty much echoed the plot of the Over the Hill Gang movies!

I'm wondering if maybe seeing these Hollywood veterans like Brennan and Astaire made me appreciate on some level going back to see some of their earlier films. If my father said while we're watching it, "Hey, there's that old Pat O'Brien!," my eight-year-old self might have thought that this O'Brien guy must be important and maybe watch O'Brien in Knute Rockne-All American next time it came on TV...At least that's my theory.

As the TV movie of the week moved along, it definitely wasn't Westerns that were my genre of choice. That would be the Horror/Thrillers. I'll look at one of those tomorrow. 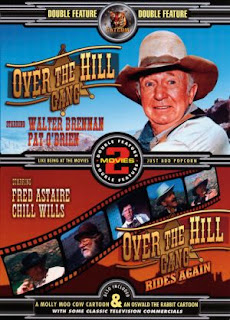 Did someone say football? The Washington Redskins of the early 70's under coach George Allen were given the nickname The Over-the-Hill Gang because of the large number of older players on their roster. 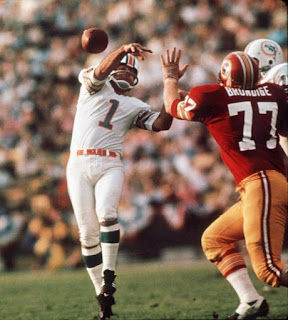 Probably the most famous play in the history
of the football version of The Over-the-Hill Gang
was this bizarre touchdown in the Super Bowl
against the Miami Dolphins. 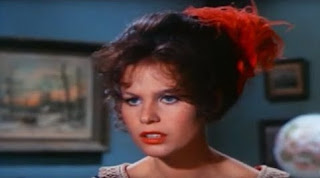 We also have our first Lana Wood sighting of the month.
Ms. Wood plays a chorus girl
in The Over-the-Hill Gang Rides Again
Posted by 1001: A Film Odyssey is produced, directed and written by Chris, a librarian. at 6:00 PM